SPOTLIGHT & GIVEAWAY | OF SILK AND STEAM BY BEC MCMASTER

When her beloved father was assassinated, Lady Aramina swore revenge. The man responsible is well beyond her grasp, but his dangerously seductive heir, Leo Barrons, is fair game. When Mina obtains evidence proving that Leo is illegitimate, she has the means to destroy both the killer and his son, a man who troubles her heart and tempts her body.

A woman of mystery, Mina’s long driven Leo crazy with glimpses of a fiery passion that lurks beneath her icy veneer. He knows she’s hiding something, and he’s determined to unravel her layer by silken layer. He just doesn’t expect the beautiful liar to be the key to overthrowing the corrupt prince consort…or to saving his own carefully walled-off heart.

Look for my later this month.

Barrons looked at her. “Do you trust me?” “No.” His father would have cut her down without thinking, but Barrons was an enigma. If he were a different man, she would have enjoyed his attentions, but a part of her couldn’t help wondering if his pursuit of her was just a way to get closer, to slip the knife in when she least expected it… Could she trust that he meant her no harm? His hand tightened around hers, dark heat sweeping through his irises. He focused on her so intently that she could almost feel it on her skin. “Then let us call a temporary truce for tonight. I shall help you escape. In return…” “Yes?” His voice roughened. “I want a kiss.” A kiss. Tension slid sinuously along her limbs, each muscle clenching. Those motives she could certainly understand. It didn’t mean she had to like them. Wariness spread through her as he lifted his hand and slowly, carefully brushed the back of his fingers against her lips. She didn’t flinch. Instead she tipped her chin up and glared him down. “Help me escape and I shall grant you such a liberty.” What harm could a single kiss do? “Until then”—she took a step back, her skirts swishing around her ankles—“I’ll thank you to keep your hands to yourself.” His hand dropped but the ghostly sensation of that touch lingered, reminding her that it had been a long time since she’d been touched in any way intimately, and never like this. Never…soft. Full of gentleness, as if the very sensation of her skin beneath his was a pleasure in itself, not merely a step to greater satisfaction. He was far more dangerous than she’d ever suspected, and she’d known, since the first moment she’d met him, that he was dangerous indeed. He was the only man who had ever managed to make her feel something. 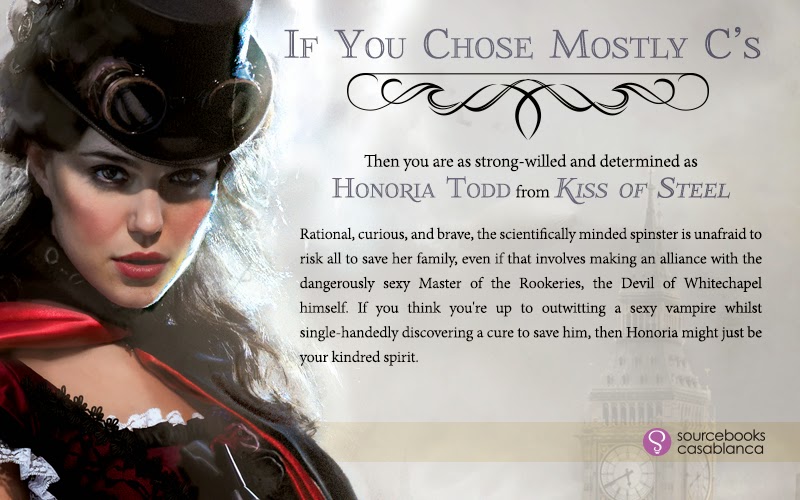 Wonder which heroine from the series you're most like?

#1 What word best describes you?

#3 What is the perfect romantic evening/date (Victorian era style)?

#5 Faced with a dangerous adversary, what would be your weapon of choice?

If you choose mostly As ...

Then you are as brave and clever as Nighthawk detective, Perry Lowell fromForged by Desire. Carrying the wounds from a scarred past, tomboyish Perry would prefer to keep to herself and just do her job, but her devil-may-care partner Garrett may have some other ideas about that - especially after she has to unleash her inner siren in an undercover operation, and he gets a glimpse at just what's she's hiding under all of that leather. If you enjoy an introverted heroine who always gets her man, then you may share a kinship with Perry.

If you choose mostly B's - Then you are as passionate as Rosalind Fairchild from My Lady Quicksilver. As the masked leader of the humanist revolution, Rosa would risk all for her cause, even if she has to infiltrate the home of her most dangerous enemy, and seduce the Nighthawk detective tasked with bringing in the revolutionary he doesn't realize is under his very nose. Using her wits to bedevil her most dangerous foe, Rosa is not afraid to ask for what she wants, especially if what she wants is 6'4" of solid muscle. If you too aren't afraid to go after what you want, Rosa could be a heroine right up your alley.

If you choose mostly C's - Then you are as strong-willed and determined as Honoria Todd from Kiss of Steel. Rational, curious and brave, the scientifically minded spinster is unafraid to risk all to save her family, even if that involves making an alliance with the dangerously sexy Master of the Rookeries, The Devil of Whitechapel himself. If you think you're up to outwitting a sexy vampire whilst single-handedly discovering a cure to save him, then Honoria might just be your kindred spirit.

If you choose mostly D's - Then you are as independent as Mina Duvall, the Duchess of Casavian fromOf Silk And Steel. Keeping her cards close to her chest, Mina is unafraid to fight for what she wants - whether that is dueling her cousin for the duchy, or stealing a kiss from her enemy, a dangerously delicious Duke's heir she just cannot get out of her mind. However, letting that man within her guarded heart is a much more difficult task, and he will have to earn her trust. If you enjoy romances featuring a battle-of-wits, and a heroine who wants to climb as high as she can, then Mina may just be your woman.

If you choose mostly E's - Then you are as daring as Lena Todd, from Heart of Iron. Though she is more at home in silk gowns and gorgeous bonnets, Lena also has a talent for clockwork, and makes the perfect spy for the humanist revolution. Nobody would ever think the charming debutante has the grit to go after what she wants - especially not the overbearing brute of a werewolf who thinks he can keep her out of danger, and out of his heart. Let's just say, he's in for a surprise. If you too would risk all for love, then you share Lena's spirit of adventure, and belief that love truly does conquer all.