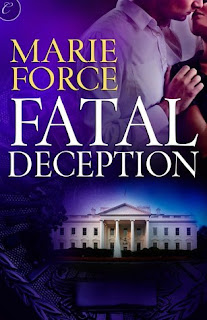 
The wife of the White House deputy chief of staff has been beaten to death, and their one-year-old daughter is missing. D.C. Police Lieutenant Sam Holland is in charge of the murder investigation, but she's forced to collaborate with Special Victims Unit detectives as well as thorn-in-her-side FBI Special Agent Avery Hill. Then, a cold case of her father's resurrects old hurts—a distraction Sam cannot afford.

As Sam's investigation heats up, so does Nick's political career—and the heat carries over to their bedroom. Will Sam put the pieces together in time to catch a killer and find the baby, or will ambition, greed and lies prove fatal?

Book 5 in the Fatal Series and I am jonesing for the next book to come out. Nick and Sam are hot in this book. As they are enjoying newlywed bliss learning more about each others likes and building their lives together.

The story line is as always awesome with the death of a very high ranking officials wife and a missing baby the plot is thick and Sam and her homicide team are knee deep in it, of course with the help of an FBI agent she would rather not have to deal with and who Nick thinks is into his wife, little does Sam know one of Sam's team members feels the same way.

While Sam is dealing with this new head scratching crime, she gets involved in another incident and as typical is hurt but the outcome is "kick ass", and Nick's career is begining to really heat up as he prepares for the speech of a lifetime.

Scotty comes to a decision on living with Sam and Nick and it turns their world upside down. And Sam comes to another decision regarding having a child of their own. McBride and Arnold dig back into her fathers unsolved cold case and confront Sam with what they find which brings Sam and her father together again about this topic - I wont say how that ends but as always its good.

I have read a lot of series in the past but this is by far the best, strong female & male lead detective thriller, political crime thriller, romance combination I have ever read and is by far my all time 5 star favorite. Way to go Marie - you are a Force to be reckoned with.