Book Review for An Outlaw for Christmas: Back Down Devil MC Bad Boy Romance By London Casey 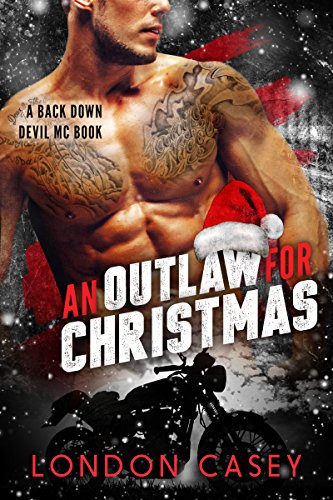 An Outlaw for Christmas: Back Down Devil MC Bad Boy Romance

Blurb
I've finally patched in to Back Down Devil MC and I'm ready to drink, fight and enjoy any willing woman. Then they give me my first assignment: I'm going to be a babysitter?! Tia, a woman half the city is hunting, needs protection. Okay, fine. Except she turns out to be a smart-mouthed, curvy beauty who sets my soul on fire. And Prez makes it clear: if I so much as touch her, I'm out of the club.

The tension is unbearable: every time I look at this woman, I'm imagining throwing her down on the bed. Then it gets worse: when her enemies close in, Tia and I are sent off to a remote cabin in the woods. Neither of us can resist. Her body is mine. And I know this is about more than just making her moan my name. I'm crazy for this woman.


Sign up for the official Outlaw Romance Obsession newsletter and you'll never miss a new release!
Sign up here - tinyurl.com/KJSignup

Let me start off by saying this is a new author for me and I have to say that I picked a good one.I throughly enjoyed this Holiday story.I happened to come across this author in a Holiday promo and thought it would great to read a few Holiday stories that were different from the norm so I picked several MC authors to try out and I have a say that all the stories I read I loved so I picked up the rest of the stories in their series.

Wow! I was hooked from the very first pages and devoured the story until it was finished.There was so much going on right from the very beginning intrigue,sexual tension,aura of danger ,sharp whit and tons of humor .The main story was about Tia and Big D known as Diesel also.I have to say I loved both character's they were interesting funny,playful,protective of each other,sexually attracted to one another and a whole lot of hotness in the air.

I normally pick one character that turned out to be a favorite of mine in a story and mine turned out to be Big D.Although I loved Tia Big D went through a lot of healing in this story even though he might not have recognized what was happening with Tia being present in his life.I loved the fact that although Big D was a newly patched  he should have been enjoying the benefits of the club for those new members but, he did not get enjoy them making him so damn uptight and frustrated it was a funny site to see. Diesel's windfall of those benefits were deprived of him because of his new job of protecting Tia.It was funny to see him so sexually frustrated it made me laugh with his antics of refraining especially as Tia was off limits to him and all members to the club. I found Big D to take his job seriously even though he wanted Tia from the first moment he saw her.I also found Diesel to be protective funny had a sense of humor and big heart even though he doesn't let most people in or close.Diesel wrestled with a few demons of his own in this story and one of them was hating Christmas which Tia absolutely loved and it was her favorite time of year.I love the fact that although he hated Christmas he went out of his way to make Tia's Christmas something special even when they were on the run from killers.He opened his heart for Tia which totally made me fall in love with him as you saw it was extremely hard thing for him to do.

This was just a great story from the beginning to the end a page turner of intrigue.Tia and Big D 's sexual tension was off the charts.I had to laugh at his punishment stunt for Tia for making him rock hard constantly and frustrated.That was some punishment guys and girls ! (LOL)I loved Tia to she really had a vibrant personality and was protective loving, funny and real  backbone.Tia is the type of gal every hard ass biker needs Tia's the perfect fit.

I was glad to be part of Tia's and big journey as the couple were falling in loving , both healing in their own way from their past hurts  that they had in there life and cleaning house with their current ones.Big D grew the most throughout this story and also had the most to lose if he wanted to kept Tia in his life after all is said and done.Tia also had some really hard choices to make also if she was going to find a life with Diesel.I really loved these characters and connected with both of them from the very beginning which is important to me when reading a story to have a connection with them.The author also did a great job at bringing all the secrets to life which made the story even more intriguing as it went along.We loved it and are looking forward to reading the others in the MC series.We are giving this a 5 star read and putting it on our favorites shelf for new author's. 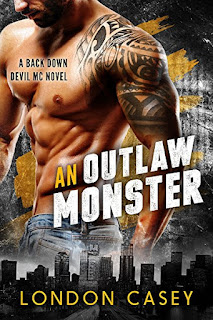 About the Author
London Casey aka Karolyn James
USA TODAY/NY TIMES BESTSELLING AUTHOR, Karolyn James has seen massive success since the launch of her series, Back Down Devil MC. In 2016, RUTHLESS HOLD & AN OUTLAW MONSTER both became top 100 ebooks in the entire Kindle store! BREAKING NEWS: The Back Down Devil MC series has just been renewed for another 12 books!Join the Outlaw Romance Obsession mailing list *TODAY* to receive offers and breaking news! - tinyurl.com/KJSignupIn October 2013, as part of a boxed set, All Access (Chasing Cross Book One)(A Brothers of Rock Novel) hit both the NY Times & USA Today bestsellers lists! And right now, All Access (Chasing Cross Book One) (A Brothers of Rock Novel) is FREE for Kindle!Under the pen name London Casey, the MC romance series Back Down Devil MC has seen the top of the romantic suspense charts! Stay up to date with everything Karolyn James here:On Facebook: https://www.facebook.com/KarolynJamesAuthorOn Twitter: @KarolynWritesVisit online: www.OutlawRomanceObsession.comMailing list: tinyurl.com/KJSignup