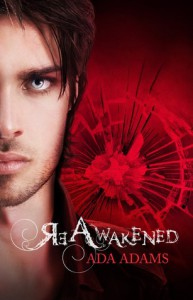 Becoming a vampire guardian was Dawn Fairchild’s ticket out of the Scarlet House. Fresh off a successful mission, life in Angel Creek should have been great. But when her sort-of-maybe-boyfriend, Sebastian, disappears on a quest to help a beautiful vampire from his past, Dawn finds herself amidst a web of danger, lies, and deceit.

Joining forces with Razor, an enigmatic rebel lacking both a verbal and a physical filter, and her band of Misfits—Brooke, Sophie, Hunter, and Seth—Dawn is thrust into a race against the clock to solve the mystery surrounding brutal Born kidnappings and come to terms with the sudden discovery of her own unique powers. With time ticking away and Born vampires’ lives in jeopardy, it quickly becomes evident that someone—or something—desperately wants Dawn and is willing to shed any amount of blood to get her.

Dawn has only one chance to face her demons and overcome all obstacles standing in her way as she embarks on the biggest mission of her life—one that threatens a deadly outcome for all involved.

Let me start off by saying that I love this cover .Ada Adams is a new author to me and I have to say that I really loved the first and second book.

The story involves vampires and humans coexisting together.In this story the vampires are known to the humans some in favor of there existence and other who are not.

This story picks up where that last one left off. Omg ! What a page turner this one was.So much going on so many changes the story kept going in a new direction which kept always changing.This time the Born (meaning born a vampire not made a vampire ) like Dawn are being Captured and Drained !

This time around this story I felt anyway had more that one plot going even though the plots were connected there were two different agenda's for the parties involved.We get to see more of Razor Sebastian's brother in this story who becomes more involved with the other character's.

My favorite character this time around is Razor.I just loved Razor's character I found him to be a lot of fun and a out going character.He was constantly teasing Dawn throughout this story which was a good thing because he was trying to get her to loosen up and not be so serious all the time and constantly worrying about everything and everybody.She was missing out on life by taking everything so seriously.He was trying to show her how to stop and enjoy life of only for a tiny bit.Which I think he did a very great job at even with all the danger that surrounded them all.Razor also is working on strengthening his relationship with his brother after being separated for so many years.

Sebastian actually made his brother (Razor) a vampire but, not intentionally . When Sebastian was newly turned he turned to his brother for help and with Razor not believing his bothers rantings he ended up draining him dry and leaving him for dead.

Sebastian thought he had killed his brother until he meets his brother centuries later.Razor has forgiven his brother thinking he should have listened more him being a Doctor he should have been a little more opened minded.Razor carries a lot of guilt for thinking he is the one who let his own brother down not the other way around.They both need to forgive themselves.
Razor works really hard at making his brother forgive himself as he holds no remorse for what was done to him.Razor grows closer to both Dawn and his brother but also with all the other misfits known as the Guardians.

We saw the characters grow even more this time around.Even though they may not truly like one another they all have this unshakeable bond between them all.Not only that they would give there lives for Dawn but for one another.The little family of Guardians are making a name for themselves slowly.A formidable foe...

You will love this read its just filled with fun characters so many twists and turns and a outcome that you will never see coming. And OMG what a cliffhanger at the very end ! So much is happening that you will be glued to the pages. So many secrets coming to light with the pieces all starting to falling into place.All the characters have truly grown but, I think Dawn grew the most of all with the help of others.The plot thickens!

Another amazing read just loved it.Looking forward to the next book in the series.A great Young Adult Paranormal Romance read.Recommended to all !
Tweet