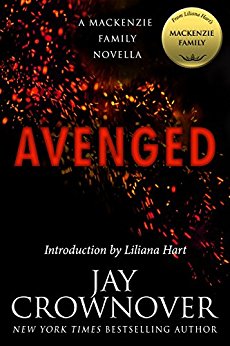 New York Times bestselling author Jay Crownover brings heat and heart to Liliana Hart’s MacKenzie family with AVENGED…Girl meets boy…On the worst night of her life when she’s decided to take a drastic step that there is no going back from.Girl is used to sitting by, letting fate deal cruel hand after cruel hand to good people with soft hearts and she’s had enough.Girl thinks it’s time to fight back against fate and against men who aren’t careful with all the precious things a woman in love has to give him.Fate shows girl who’s boss and turns her world and plans upside down without breaking a sweat.Boy meets girl…On the best night of his life when he’s decided that he’s going to make moves to be the man he was always meant to be instead of the man he was trained and conditioned to be.Boy is used to a solitary life, quiet in the woods and knowing the only thing that might be looking for him is trouble and trouble is no longer his stock in trade.Boy thinks it’s time to show trouble who’s boss, even if this trouble has big blue eyes and a body made to make men stupid. Trouble only gets the upper hand if the boy falls prey to its temptation.Trouble turns the boy’s quiet, serene life sideways without any effort.Trouble is fun and fate has a wicked sense of humor when it comes to this boy meeting this girl.

Lets start of by saying this is a new author for us a we throughly enjoyed our first read by them.We enjoyed it so much that after finishing this story and that of Never Surrender we purchased two more books in the MacKenzie series.We are looking forward to reading more about those MacKenzie men.
I love this stories plot and it character's .I found them to be engaging, funny, playful,serious,heat-broken,dangerous,regretful,lost,protective,love able,sexy,sweet,caring making them  so intriguing to read about.
I love when two lost soul's find each other and share a connection with one another and have amazing chemistry together.A chance meeting where a couple happens to come into each other life when I just so happens when both are at their lowest points.I love when people who have made bad choices in life are able to find someone they can relate to making it possible where they can finally bare their souls to one another and who would  be able to understand  what they are going through. To sympathize with their past life choices..What I loved about both Echo and Ben is that they owned up to their past's without making excuses and just moved forward to try and make themselves better for themselves and others around them.When shredding their secrets there was no judgement  just sympathy and understanding.Each of them just owned who they were and I really liked that about them.
I always have a favorite character in a story that I pick and mine is going to be Ben.Echo was a favorite to but Ben tipped the scales for me because I loved how he found himself doing things so out of character for him.I saw the most change in his character then any other.Ben could be grumpy,serious,dangerous,deadly,selfish self absorbed and had a huge ego but we saw a totally different side to him when it came to his interactions with Echo.He just amazed me and  had me smiling at every turn.How could this deadly predator treat a women with affection , be gentle and kind and handle her with care and be possessive of someone he just met  and yet be a stone cold killer on the other hand.Ben was instantly attracted to Echo and fought it at every turn knowing he was no good for her knowing that there was not going to be any kind of future for them.What I did love is that he regretted his past for once in his life just wishing he had been a better man and worthy of Echo.I really liked how he teased Echo and called her pet names especially when he gave her the name pop tart.Why that name ? Because he love them. Sigh..I was totally drawn to him with his dangerous aura that sexy grin and that sweet protective side of him making him irresistible .I guess you can say that I fell for him just like Echo did.We always love that certain sweet  knowing it's bad for us yet loving it anyways.We just can't help ourselves its just our one and only sinful indulgence! (laughing out loud)
I have to say that I loved everything about Echo as well.I found her to be sweet ,kind ,love able,sexy,lonely.I felt Echo's pain and suffering at the loss her sister and her guilt at not being able to save her.She took her sisters death to heart and should not have.That guilt only made her resentful , angry and wanting nothing more than to seek revenge for the person she felt  contributed to her sisters death.I loved how Ben helped Echo deal with all of that and put things in perspective so she would be able to heal.I love the chemistry this couple had along with their amazing hot and sexy interludes.One of the things that surprised me the most about Echo is that she never felt afraid of Ben even when she was in no condition to defend herself.They simple bonded and a trust had be formed right from the onset.
I believe that fate put this couple in each other path.The funny thing about fate is that it is not always kind.Even though there may not be a happy after for this couple their being together brought healing to those two lost lonely souls and put them on the a path to find the happiness they were both seeking out of life.I loved this story from beginning to end with all its twist and turns ,it's up and downs ,it's amazing character's that were interesting and you were able to relate to. I was drawn to them from the very first pages.I found myself smiling more than once and chuckling every now and then making it just another fun and fantastic read for us.
I will be looking forward to this author's other works as well. A recommend read to all ! 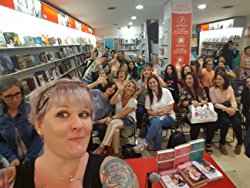 Jay Crownover is the International and multiple New York Times and USA Today bestselling author of the Marked Men series, The Saints of Denver series, the Point and Breaking Point series. Her books can be found translated in many different languages all around the world. She is a tattooed, crazy haired Colorado native who lives at the base of the Rockies with her awesome dogs. This is where she can frequently be found enjoying a cold beer and Taco Tuesdays, as well as live music and terrible TV shows. Jay is a self-declared music snob and outspoken book lover who is always looking for her next adventure, between the pages and on the road.You can email Jay at: JayCrownover@gmail.com

You may find us here !