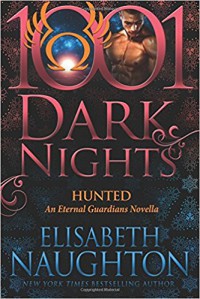 From New York Times Bestselling author Elisabeth Naughton, comes HUNTED,a new novella in her Eternal Guardians Series, brought to you by 1,001 Dark Nights! Be sure to grab your copy today!

Erebus – Dark in every sense of the word, a skilled and lethal warrior, and sinfully sexy by design.

Since the dawn of modern man, Erebus was Hades’ secret weapon in the war between the immortal realms. Until Hades lost the minor god in a bet to his older brother Zeus. For the last hundred years, Erebus has trained Zeus’s Siren warriors in warfare and the sexual arts. But he’s never stopped longing for freedom. For a life filled with choice. And lately, he also longs for one Siren who entranced him during their steamy seduction sessions. A nymph he quickly became obsessed with and who was ripped from his grasp when her seduction training was complete. One he’s just learned Zeus has marked for death because she failed the last Siren test.

Before Erebus can intercede on the nymph’s behalf, she escapes Olympus and flees into the human realm. In a fit of rage, Zeus commands Erebus to hunt her down and kill her. Erebus sees his opportunity to finally go after what he wants, but he’s torn. Freedom means nothing if the Siren at the center of his fantasies doesn’t truly crave him back. Because defying the gods will unleash the fury of Olympus, and if he chooses her over his duty, whether she joins him in exile or not, the hunter will become the hunted.

Let's start off by saying that this is a first time read for us by this author and that we really enjoy our first read by them.

Erebus and Seraphine are in and impossible situation.Erebus is tasked to securing Sera and returning her to Zeus after she flee's.That is going to be a problem for Erebus as they have a past and he has unresolved feeling for her.

What a story it was action packed from  beginning to end.There was always something going on you were kind of living on the edge with them.The chemistry between these was amazing and hot as hell.

Sera I found her to sexy ,strong will, smart a surviver and very clever.

Erebus was protective,dangerous,immortal,a god, and sinfully sexy.I loved how he was willing to give up his life to see Sera protected and safe from her enemies.


I loved the story as it was very engaging as we learned a lot about both characters as well as a few very dangerous secrets coming to life.

I loved that Sera was brave enough and strong enough to save both of them .These two
were destined to be together and I am so glad that they found the happiness they both deserved.

I love it when you can connect with the
characters that you read about and I was able to do that with a cast of characters as I loved them from the onset so we already new we were going to love this story.When you are dealing with deities and gods you know your in for one hell of a ride as they are dangerous and lethal and without conscious.

A sexy read with intrigue mystery and love as well as a touch of erotica thrown into the mix with some scorching sex scenes.

We loved this novella are are looking forward to reading other books in this series as well as the authors other works.

Elisabeth Naughton is a New York Times and USA Today bestselling author. From Elisabeth: “I was never one of those people who knew they wanted to be an author at the age of six. I didn’t have imaginary friends. I didn’t write stories in my journal or entertain my relatives by firelight after Thanksgiving dinner. For the most part, I was just a normal, everyday kid. I liked to read, but I wasn’t exceptional at it. And when my teachers complimented me on my writing abilities, I brushed them off. I did, however, always have a penchant for the unique and absurd. And as my mother told me all throughout my childhood, I should have been an actress—I was a drama queen before my time. “Years ago, my husband bought me Scarlett: The Sequel to Gone With The Wind. If you ever saw the book, you know it’s a long one. I sat and read that thing from cover to cover, and dreamed of one day being a writer. But I didn’t actually try my hand at writing until years later when I quit my teaching job to stay home with my kids. And my husband? After that week of reading where I neglected him and everything else until I finished Scarlett, he vowed never to buy me another book again. Little did he know I’d one day end up sitting at a keyboard all day drafting my own stories. “My writing journey has not been easy. I didn’t just sit down one day, decide I was going to write a book and voila! sell my very first attempt. As most authors will probably agree, the path to publication is filled with hours of work, pulling all-nighters I thought I’d given up in college, sacrifices, rejections, but a love I discovered along the way I just can’t live without. Instead of a big, thick book to read by lamplight (I do read much smaller ones when I get the chance), I’ve traded in my reading obsession for a laptop. And I’ve never been happier. “I’m one of the lucky ones. I have a wonderful family and fabulous husband who put up with my writing—and obsessive personality—even when life is chaotic. More than once my kids have been late to swimming or baseball because I needed just five more minutes to finish a scene. Their support and encouragement mean the world to me. I also have amazing friends and a support network I couldn’t survive without. So to all of you out there who have encouraged me along the way, sent me emails and fan letters, phone calls and congratulations, I just want to say, thank you. You make this whole writing gig that much more enjoyable. I truly wouldn’t be here without you.”