by Anna Campbell Captive of Sin 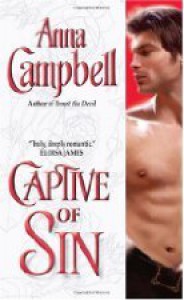 Captive of Sin
by Anna Campbell

Returning home to Cornwall after an unspeakable tragedy, Sir Gideon Trevithick comes upon a defiant beauty in danger and vows to protect her whatever the cost. He's dismayed to discover that she's none other than Lady Charis Weston, England's wealthiest heiress—and that the only way to save her from the violent stepbrothers determined to steal her fortune is to wed her himself! Now Gideon must hide the dark secrets of his life from the bride he desires more with every heartbeat.

She promised to show him how to love—and desire—again . . .

Charis has heard all about Gideon, the dangerously handsome hero with the mysterious past. She's grateful for his help but utterly unwilling to endure a marriage of convenience—especially to a man whose touch leaves her breathless. Desperate to drive him mad with passion, she would do anything to make Gideon lose control—and fall captive to irresistible, undeniable sin.


Really enjoyed this book it reminded me of how Bertrice Small writes her books. This book was a true romance of two troubled souls finding true love along a very rocky path. Gideon started out with trying to help a troubled girl vowing to protect her from the trouble that she is running from but in return she helped Gideon get is life back that he thought he had lost after being tortured and held in a foreign prison for a year . Gideon thinks his life is over and that he is mad and out of his mind but soon he finds out that his little determined wife is not giving up as she gradually co-worse's him out of his dark shadows and finds that his one true love will cure him after all.
Tweet