Excellent little beginner to what will be a cool trilogy! 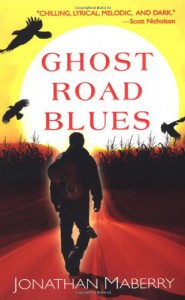 Fantastic little beginning to what is known as The Pine Deep trilogy!

When i first read this the edition i had had no reference to any more books being continued and i was like boy Maberry left us with a cliffhanger of sorts so i hope Maberry writes another one. well a few years went by and i had had almost completly forgotten about this gem of a novel, even donating my copy of the book to a xmas book drive at my wife's place of business, when the storyline happened to just appear in my mind and i was like damn! I want to re read that again. Low and behold after searching around i found out it had spawned two more sequels whilst being out of my mind.  Needless to say i now have all 3 downloaded into my Kobo and of coarse i had to re-read Ghost Road Blues again!

Wow it took me little and no time to fall back into this gripping little page turner that is written similarily to Stephen King's way of writing so if you are a fan of his stuff, you should have no problem with Maberry's works.  The storyline is very suspenseful, the town of Pine Deep is known by one thing majorally and that is its fantastic Halloween spirit also looking the part with it's spooky forest areas and farmer's fields. Years ago an evil spirit took hold of one of it's citizens Uber Griswold and possessed him to begin a murdering spree eliminating alot of Pine Deep's citizens, mostly children. Enter The Bone Man a young african american who seeks forth the evil in Griswold and eliminates him, only to be blamed later by the racist townspeople who believed him to be the murderer only to be lynched by them himself succombing also to death.

Many years later.. it seems that the evil spirit that once inhabited Uber Griswold is back and comandeering through thougts and dreams a whole new host of nasty men to do his evil bidding. Malcolm Crow a favorite of then Pine Deep townspeople, who also runs a Halloween seasonal hayride that apprently is the best in the nation. Crow is the warrior chosen to face the evil of days gone by, although un beknownst to him, He fights the baddies to save his girl and hopefully save Pine Deep from succumbing to evil!