Review for Gemini of Emreiana (Gemini #1) by Kristen DaRay 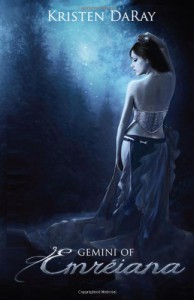 Blurb
My entire life has been a lie.My parents didn't die in a car accident.They're not even dead.I am not American.I'm not even human.I have strange powers, and I'm the heir to the throne of the planet Emreiana.

This is the debut book for this author .I have to say that the author did a fine job introducing us to a whole new world and like-able characters to read about.

This story is about a young girl Carsona who is living with her Aunt who has raised her since her parents death.She is just an average teenager or so we thought.Carson is valedictorian at her school for her senior year and life seems great.She has the handsomest loving and caring boyfriend Kyle who she is just head over heels in love with.Goals to finish and then graduate and then off to College but, after sending out tons of applications she is denied from everywhere and no one seems to wants her.What  gives she has a 4.0 average ?

Carsona life is about to change when she meets up with a man she has only been dreaming about Aaronmon.Her Aunt has to explain to her that she is not human girl at all but, really is the lost princess from a place called Emreiana.She learns her mother and father are not dead just living on a different planet and that Carsona was sent here with her Aunt to be protected from those who wanted to do her harm .Her mother and father were King and Queen of her rightful people.
Can you imagine getting this news ?Carsona struggles to adjust.Things are happening so fast  that she doesn't think she can cope but, will have to the Bremoir and are here to silence her forever.
This is a young adult paranormal romance with a sci fi feel to it.This is something that I do not typically read but, once I started I could not stop.Once the author started describing the planet and its surroundings you were so engrossed it sounded so beautiful and had you falling in love.
I felt so sorry for Carsona her life is suppose to be moving forward instead everything is falling a part around her she feels so alone.With the strain of keeping her secret she breaks up with her boyfriend Kyle who she known since she was five they met at the playground.He was her rock and she feels she has nothing now.She doesn't want to except the things she was told or that she is in line to rule next. Carsona's emotions are all over the place she is Empath and needs to learn to control her abilities that have been laying dormant up until now.She will have to if she wants to live to see where she came from and to meet her parents after all this time.
So much goes on around you in this book.Twists and turns all over the place.So many secrets kept at bay now unfolding.Dealing with emotions and betrayal are hard to swallow.More and More secrets!
Carsona at times got up nerves even though I had a understanding of her a what she had felt about being lied to whole life her constant denial of ever coming back to the life she had was gone yet, she kept talking as if nothing was going to change.My God people where here to kill her and she is seeing all this death and destruction around her and yet the girl is still in denial that she is going to live as a human again.
I normally have a favorite character I like to rave about, fall in love with but, I never connected with anyone character that way.One character my heart did break for and who my heart went out to was Kyle for about what he will be losing the girl he has loved his whole life.But, when problems between them arise he breaks things off with Carsona breaking not only his heart but hers as well .Even though she would have had to eventually break things off with him to keep him safe.I really got pissed with Kyle as I felt that he didn't fight hard enough for there relationship.Up until the invaders came they were both living on cloud nine.The boy did nothing but, tell the girl that he loved her ever other second and now your walking away because things are a little awkward?I stewed about this for a bit but, after reading the sequel to this book I have a better understanding at why he did the things that he did.
This book was pleasure to read so much information to uncover about Carsona's original origins.Learning that there is life on other planets.Learning a new language so that you can communicated with others in your new home.Learning how to master your new abilities that you never new you had.Learning who is trying to kill you and why.Learning that you might find love again in the mist of it all.All the while we were there with Carsona lending our moral support to her and her uncertain future.
A recommended reader to young adult readers.Looking forward to Carsona and Aaronmon's next journey .
Angels with Attitude Book Reviews Book Review Gemini #1 Gemini of Emreiana Kristen DaRay Paranormal Romance Sci Fi Young Adult
Source: http://angelswithattitudebookreviews-joelle.blogspot.com/2013/12/review-for-gemini-of-emreiana-gemini-1.html