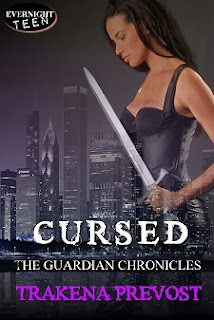 Blurb:   Half-succubus Jazz Watkins spends her days navigating the halls of Moreland High and her nights knee deep in Chicago drug dens hunting Suecai – an evil kind of incubi and succubae who devour the souls of humans. But when a leader of the Suecai curses her, Jazz has to track him down. Either she kills him before the curse burns through her, or she’ll become a full-fledged, out of control, soul sucking monster.


She’s got a handful of weeks, absolutely no leads, and her sexy best guy-friend and team member, Khan, covering her back. But will the growing attraction she feels for Khan get in the way of her mission to save her own life?


Excerpt
So I waited. Soon enough, three Suecai surrounded me.
The redhead and blonde chicks looked as if they’d stepped straight out of a bar in the 1970’s, with their teased hair and retro, glittery nightwear. They were almost pretty, if you were into that whole “blast from the past” sort of thing. The guy with them towered over me with his thick and hardened limbs. His clothes weren’t as crazily out of date, looking as if he’d just gotten off work at some factory. But the faded jeans and white T-shirt look that most factory workers loved hadn’t really changed over the years, so that wasn’t saying much. Each of the vermin had eyes electric-blue with the Chi they’d consumed.
If I hadn’t already known what they were, their eyes would’ve been a dead giveaway. You had to catch them uncloaked to see that, though. And the only way to do that was to surprise them somehow – catch them mid-feed, flash them with beams of light without warning, get them seriously riled up, or something along those lines.
The three around me started doing that mental connection thing they liked so much. I could tell because they kept making facial expressions that should’ve had some dialog to go with them, but didn’t.
They sized me up, and I knew what they saw – a chocolate child with the sort of toned curves that could drive the boys crazy in the right gear. My black hair was pulled back in a tight French braid that fell just past my shoulders. My hazel eyes, no doubt tight with the anticipation I felt, were the only part of my face they could see past the standard issue mask that we Guardians wore.
Oh yeah, I was the embodiment of danger. They were sure to be shakin’ in their out-of-date boots… not. That slip-up in judgment on their part would work nicely in my favor.
The blonde looked at me with a lazy sigh while the redhead twirled a piece of her long locks. Gigantor shrugged. Each of them took a step towards me, and I went into super-concentration mode. With my hearing I tracked the blonde to my left. I kept the redhead to my right in my sights the same way. Gigantor in front had my full attention.
From the relaxed stances of the women, they’d assumed I would take on Gigantor first. The way I’d honed in on him, I’d expected they would. Instead, I took two steps to my right, twisting my sword in that direction, and pierced Red in the chest. I kicked Gigantor in the stomach as I pulled my weapon free and sliced down on Blondie’s neck.
Author Bio:
Trakena Prevost was born and raised in the great state of Texas, where everything IS bigger and the people are very friendly. She spends most of her time oscillating between being completely obsessed with reading and watching Korean dramas, and writing down the fantastic tales rumbling around in her head. When not reading and writing, Trakena spends her time working in HR for a major medical system in Houston, and hanging out with her family and friends.
Trakena has always loved the many worlds she's found in books, where everything was possible. As a child, you would often catch her enjoying a good story in the comfort of the AC, instead of wilting in the Houston heat (she showed great intelligence...even then). It didn't occur to Trakena that the fanciful stories she made up for fun could one day be out in the world, but now that they are she can't imagine it any other way!
Website and Other URL’s:
www.trakenaprevost.com
http://theeternalwritingoptimist.blogspot.com/
https://twitter.com/trakenaprevost
https://www.facebook.com/TrakenaPrevostAuthor
blog Blog Tour books Cursed Paranormal Paranormal Romance The Guardian Chronicles Trakena Prevost
Tweet