Blog Tour for Once Upon A Hero with Giveaway 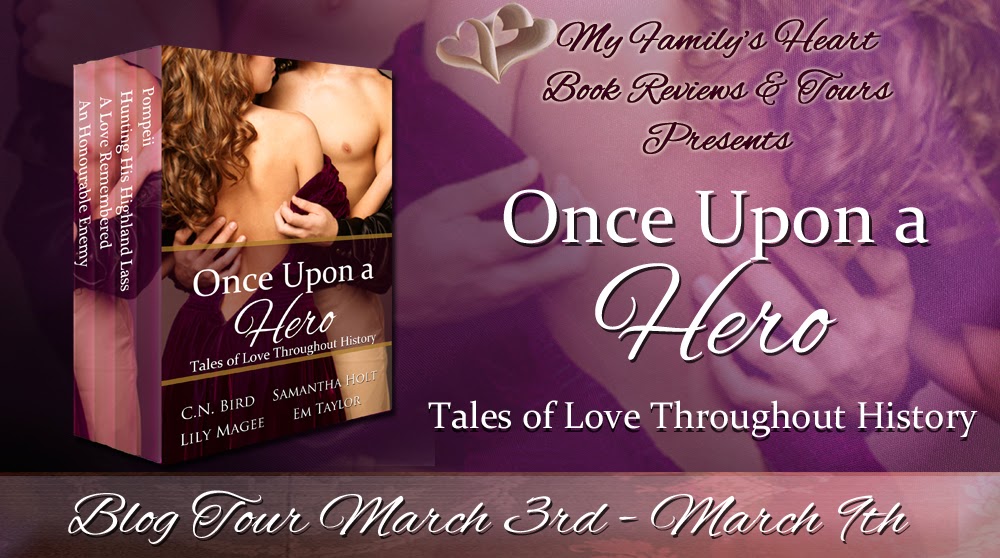 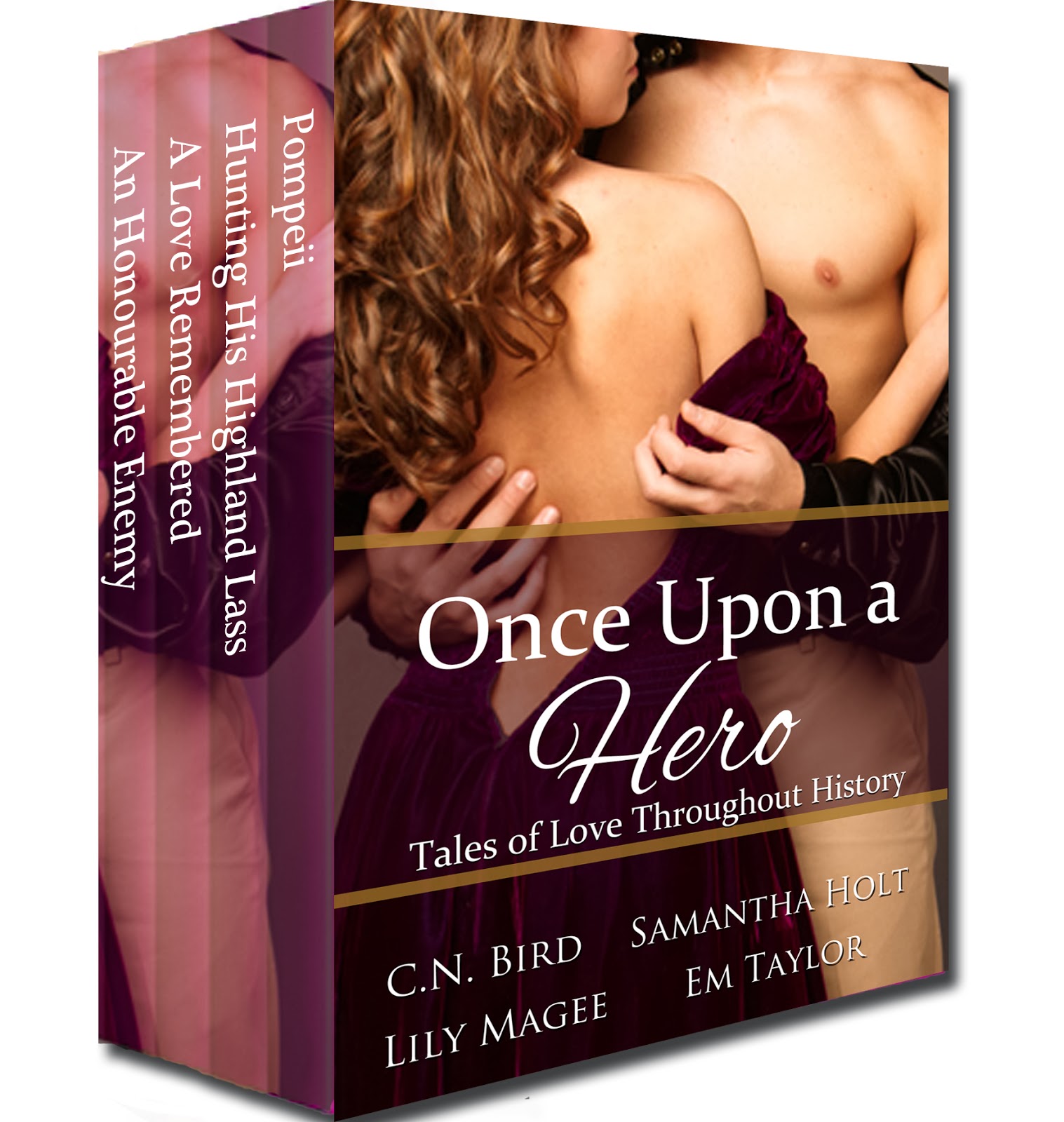 Title – Once Upon a Hero
Author – C.N. Bird, Samantha Holt, Lily Magee, Em Taylor
Genre – Historical Romance
Publication Date – 1st February 2014
Length (Pages/# Words) – 50,000 words
Publisher – Indie
Cover Artist – Samantha Holt
Book Synopsis –
Four tales of love throughout history.
Pompeii by C.N. Bird
69 A.D.
Following the loss of her father and her mother years later, Hadriana is saved from a life of prostitution by her closest friend Victus. Through rebuilding and many loves, one night finds them unable to resist their feelings for one another any longer. With their new found affection and moving forward in their lives, the city of Pompeii seemingly doesn’t have a happy ending in store.
Hunting His Highland Lass by Samantha Holt
Scotland, 1292
Rory MacPherson has returned home to find his castle overrun by the English and his timid wife missing. So when he hears of her tales of bravery, he’s just a little surprised. But his main concern is whether she is still alive or has been captured. Upon discovering her intention to run to her father’s and to leave their affectionless marriage for good, Rory realises just how much sweet Isla means to him. Can the warrior get past his fears of being too rough for her?
Though fear of capture drove Isla out, it’s the fear of returning to her marriage that keeps her travelling across the unforgiving Highlands. Not that doesn’t care for her husband, but she can no longer bear desiring a man who clearly doesn’t want her. Believing that he must be sharing his bed with another lass, Isla plans to beg her father for refuge from the English…and her husband. But the journey is dangerous and Rory is a determined man. Will he even let her go?
A Love Remembered by Em Taylor
England, 1811
When Lord Benedict Mallory is lost at sea while fighting in His Majesty's Navy, Lady Cassandra Strong knows her happy ever after with the handsome duke's son will never be. That is until she spots her friend's footman. He bears a striking resemblance to the Lord who was presumed drowned.
A chance encounter with the newly restored Earl leaves Cassy with no option but to marry Lord Benedict. Can they overcome his loss of memory and forge a marriage for themselves?
An Honourable Enemy  by Lily Magee
Russia, 1812
War has been kind to Capitaine Amaury de Poitiers. With every victory over the Russians, Napoleon’s Grande Army brings ever greater glory to France. Highly regarded by both his superiors and his men, his career looks set to soar.
When he is tasked with guarding a prisoner of war critical to the war effort, an archduchess no less, Amaury finds himself enchanted by her. The only surviving member of her family, the proud Katinka of Viasma is overwhelmed by grief and the desire for revenge upon the French for her family’s death. Despite her initial hostility, Amaury finds himself becoming ever more drawn to this feisty, angry yet fragile young woman and is overcome by the need to protect her. Katinka in turn finds herself confused by her increasing attraction to the witty, chivalrous capitaine who refuses to give up on her despite her temper.
Their longing for each other is undeniable but both of them know that the barriers between them are great. Amaury finds himself torn between his mission, his love and his honour. Katinka is a noblewoman and he is but a common soldier. To be together could cost Katinka everything.
Can Amaury and Katinka ever overcome the barriers of war and class that separate them?
Amazon Kindle Link – http://amzn.com/B00IA8ZDFQ
GIVEAWAY – Please list the Prize or Prizes for the giveaway.
$10 Amazon GC
2 x ecopies of Saved by a Rake by Em Taylor
2 x ecopies of To Steal a Highlander’s Heart by Samantha Holt

AUTHOR INTERVIEW – Angels with an Attitude

What would you have done differently if you were the main character of your book?

I probably would not have taken Lord Sefdom home and thus been forced to marry him or be ruined. Though I would still have wanted to marry him.

What was your inspiration behind this book?

A friend came up with the idea. She liked the idea of the letters going back and forth between a loves who would eventually be lost.

Why did you become a writer?

I was put off writing when I was in high school after being told to write a first chapter of a book as part of an exam. I was accused of plagiarism which was completely untrue. They told me a sixteen year old could not write something that good. So I wrote nothing for over 20 years. Then some friends convinced me to try my hand at Star Trek fan fiction one night which I did and they liked it. I spent a year writing fan fiction before venturing into the publishing arena. The truth is that now I love it and can’t imagine not writing.

Do you have a favorite author or authors?

Lots of favourite authors. In the regency field I love Mary Balogh, Sarah MacLean and Julia Quinn. I also love Lynsay Sands, Mollie Harper and Jeffrey Archer. Of course, the ladies whom I share Once Upon a Hero are also great writers.

Oh I think it would have to be Colonel Brandon. He’s charming and gruff and honourable.

What kinds of books do you like to read in your spare time?

I tend to go for audiobooks. I suspect that’s a bit of laziness. I do tend towards Regency and Victorian romances or light paranormal romances.

As a reader and writer I think it is important to get to know your fans and make a connection with them as an author who takes the extra step to hear what their fans think and want in their continued writing is continued success and key to selling more books. Do you agree with that?

I do, more so now than ever before. The internet has made everything so immediate and friendships easy to forge. I love hearing what readers think, even when it’s not all that complimentary.

Do you cry when writing sad scenes?

Did you have a Cover Designer?

I do. She is a friend I met through the Star Trek fandom and she does my stuff for free. I just buy the photos and she does the rest. She’s wonderful.


Who is your fictional boyfriend or girlfriend crush?

If you were able to dine and have a one on one with your favorite writer/author who would it be?

I think it would have to be Mary Balogh.

Do just re-read your favorite books?

Yes, I do. Not as much now as I did when I was a kid but I definitely go back to them when I run out of books or funds or just feel nostalgic.

Do you ever get in a reading slump like your readers do?

Nowadays I find reading an ebook or a paperback difficult. I have got out of the way of it. I prefer to have audiobooks. I only hit a slump if I really cannot bear the narrator.


What is the funniest book you ever read?

I think the first two Bridget Jones books. The best scene ever was when Bridget interviews Colin Firth about his wet shirt scene in Pride and Prejudice. Sadly because Colin Firth played Mark Darcy, they couldn’t put that scene in the film.

EXCERPT
Hunting His Highland Lass by Samantha Holt
He reached the village leader’s house and dismounted, hopping down and tying his mount to the joust of the well that sat in the centre of the settlement. Before he made himself known to the man, a young lass, not much older than Isla, scurried up and dipped into a hurried curtsey.
“My laird,” she said breathlessly.
“Aye, lass, what is it? Speak quickly for I crave a word with yer leader.”
“He is out in the fields at the moment, laird. We are checking the flocks. The English were on our land last night.”
“Hellfire, in truth?”
“Aye, my laird.”
Rory swung his gaze around and frowned. “But they didnae harm ye?”
“Nay, my laird. We scared them away.” A smile flickered on the fair haired lass’s lips.
“Scared them away ye say?” He shook his head. How had a bunch of raggedy peasants scared away a troop of battle-hardened English? “Then all is well?”
“Aye, my laird. But I must tell ye…yer lady wife was here.”
He gulped. So she was alive. But that meant little now. Not until she was in his arms where she belonged.  “During the attack?”
“Aye, she—the lady that is—helped us scare off the English.”
Rory rubbed a hand across his face. “Ye cannae mean Lady Isla, surely? Were ye mistaken, lass?”
“Nay, truthfully, my laird. She sought refuge with me. She said the keep had been overrun and she was to travel to her father’s. Does this mean ye have won back the castle?”
“Aye, aye.” He waved a hand. “Is she here still?”
“Nay, my laird.” The girl’s face dropped. “I tried to persuade her but she wouldnae listen. She seemed very determined to travel on.”
“God’s blood,” he whispered.
“Forgive me, my laird. I should have tried harder but we didnae know ye were on yer way. She insisted she needed to ensure the English didnae catch up with her in case they tried to use her against ye.”
“And she is unaccompanied?”
The girl bit her lip. “Aye.”
Rory groaned. The lass had fought the English twice and was now gallivanting around the Highlands all alone. It was so at odds with what he knew of his wife. It didn’t stop the fear clutching his heart. Though the lass was more a warrior than he ever realised, she was still vulnerable. And still determined to make it to her father’s. If her father agreed to protect her from him, he might never see her again. Might never get the chance to try again. To show her he had changed and could be gentle.
“What is yer name?” he asked the girl.
“Kate, my laird.” She grasped her skirts and dipped again.
“My thanks, Kate. Tell the villagers that I have claimed back the castle and will send men out to patrol the lands. We’ll no’ be threatened by the English scourge again. I will have ye a fine fat pig sent to ye in return for looking after my lady wife.”
“Oh, pray, ye dinnae need—”
“I do. Good day to ye, Kate.” Without waiting for a response, he leapt onto his mount and gripped the reins. At least he knew one thing. Isla was alive. For the moment. Determination pervaded every fragment of him, making his muscles tense.  It seemed Isla was resolved to prove she was more than the sweet lass he thought she was. But could he prove to her he was more than just a rough warrior? 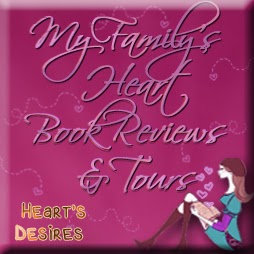