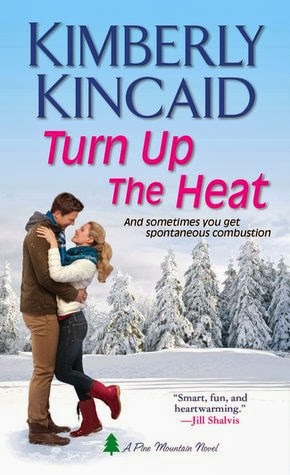 
There are only so many times a girl can hear those words before she believes that it is, in fact, very much her. Unexpectedly jilted by her locally famous boyfriend and haunted by a boss who makes Attila the Hun look like a lap dog, Bellamy Blake does what any self-respecting girl in her shoes would do. She rounds up her two best girlfriends and makes plans to get the hell out of Dodge.


But Bellamy's escape plan takes a nose dive on the side of rural route 164 when her transmission self-destructs, leaving her in the middle of a cell phone dead zone with nothing but her wits. Oh, and Shane Griffin, the hottest mechanic who's ever checked under her hood.


Yet this small-town man isn't all he seems. Can Shane and Bellamy prove that sometimes the most unlikely ingredients make the most deliciously sexy mix?
Buy Links
Amazon: http://www.amazon.com/Turn-Heat-Pine-Mountain-Novel/dp/1420132830
B&N: http://www.barnesandnoble.com/w/turn-up-the-heat-kimberly-kincaid/1115633578?ean=9781420132830
Kensington: http://www.kensingtonbooks.com/book.aspx/24079
Goodreads Link: https://www.goodreads.com/book/show/18051946-turn-up-the-heat?ac=1
Link to Follow the Tour: http://tastybooktours.blogspot.com/2013/10/now-booking-tasty-virtual-book-tour-for_24.html

Author Info
Kimberly Kincaid writes contemporary romance that splits the difference between sexy and sweet. When she's not sitting cross-legged in an ancient desk chair known as "The Pleather Bomber", she can be found practicing obscene amounts of yoga, whipping up anything from enchiladas to éclairs in her kitchen, or curled up with her nose in a book. Kimberly is a 2011 RWA Golden Heart® finalist who lives (and writes!) by the mantra that food is love. She has written two digital novellas, Love On The Line and Drawing The Line, about hot cops and sexy chefs, with a third novella, Outside The Lines, due this summer. She is also thrilled to have collaborated on a Christmas anthology with Donna Kauffman and Kate Angell, titled The Sugar Cookie Sweetheart Swap, to kick off her Pine Mountain foodie series with Kensington this October. Kimberly’s first full-length novel, Turn Up the Heat, will follow in February 2014. She resides in northern Virginia with her wildly patient husband and their three daughters.
Visit her any time at www.kimberlykincaid.com or come check her out on Facebook (www.facebook.com/kimberly.kincaid1) and Twitter (@kimberlykincaid).
Author Links
www.kimberlykincaid.com
www.facebook.com/kimberly.kincaid1
http://www.goodreads.com/author/show/6938229.Kimberly_Kincaid