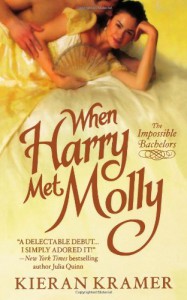 
He's always been a player.

Dashing Lord Harry Traemore is perfectly content to live out his days in the pursuit of pleasure. But when he's named by the Prince Regent as one of society's "Impossible Bachelors," Harry is drafted into a ribald romantic wager. The rules of engagement are scandalously simple: The bachelor whose mistress wins the title of "Most Delectable Companion" gets to remain unmarried. Harry is utterly unconcerned about his status...until his latest lightskirt abandons him.

Who will win this game of love?

Enter Lady Molly Fairbanks. Harry's childhood friend—actually, "foe" is more like it—is the most unlikely companion of all. She's attractive but hot-headed, and in no mood for games. Besides, what could the self-indulgent Harry possibly know about what makes a woman delectable? It's time for Molly to teach him a lesson once and for all...but will it lead to "happily ever after"?


The character's were awesome you could not help but love them all save for one of them lol.

Molly and Harry had a run in when they were younger they despised each other hoping to never see each other again. During which time each of there parents sent each of them out of London's reach to avoid scandal. Years later they met at a Inn Molly with her intended and Harry with his Mistress. Molly was on here way to Greta Green to elope with Cedric one of her fathers co-workers but Cedric spies Fiona Harry Mistress and decides that getting married to Molly's not what he wants he wants Harry's mistress instead.

Left alone both dumbfounded are Harry and Molly to fend for themselves .Even though Molly and Harry still hold grudges towards each other, Harry cannot leave Molly alone and unprotected.But, Harry is on is way to a house party that the Prince Regent has set up for several bachelors and must arrive there with his Mistress as she is part of the game. The game that the Prince Regent is set up is to win the contest to be the The Most Delectable Companion. This means if Harry's Mistress is chosen above all others he will win one full year of freedom from the match making momma's trying to get there daughters married to him becoming leg shackled free for another year.

What man would not be up to winning this contest ? But, the loser must propose marriage to the Regents choice in a wife.Harry convinces Molly to play along with him for and entire week pretending to be a false Mistress and he will then return Molly home to her father with no hint of the folly Molly was about to make with Cedric.She agrees to help Harry with his Mission but what does a virgin know about being a mistress as she has never even been kissed .

Harry has been chosen by the Prince to set forth the rules of the game and the Princes wishes on the game in which it can be played. Needless to say she is failing horribly at being a mistress so Harry's sets out to give Molly some tips and practice on how to be a good Mistress.I won't have to tell you how this is going to turn out. LOL. Molly is coming to care for Harry regardless of his past so she decides to give it her all to help Harry win this contest.The men after every challenge need to pick there favorite Mistress of the day each night into a kitty and at the end of the week all votes are tallied and the winner declared.

But, with Molly's quick wit she turns the tables on the men to and has them competing for a title as well.Giving Molly as chance to win the other bachelors over and on to her side in order to win the game.

But , as usual there is a rogue in the mist trying to seduced Molly and her secrets out of her so she has to work even harder to win the game in turn making her life miserable with his interfering ways.But, Molly is not giving up ! You can only guess who I am rooting for. Go Molly !.

Thought this was just a great really funny love story that made you laugh and cry throughout the book and I just kept those pages turning because I couldn't wait to see what would happen next.This was a new author for me and she now has a fan in the making ,looking forward to her next book in this series .