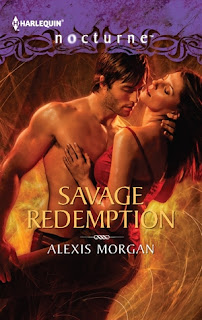 Just when he's getting his life back on track, the woman responsible for ruining it arrives—in jeopardy—on his doorstep.When gunfire erupts just outside the gates of the O'Day estate, chief of security Conlan Shea is first on the scene. With bared fangs, the half vampire, half human gently turns the wounded victim over only to find himself staring into the exquisite turquoise eyes of the woman who ripped his heart out three years ago.

Kat Karr. The name still evokes such turmoil. One night of fierce passion had cost Conlan his life, his job and his heart. Now she's back, injured and desperate for help. Kat's in real danger, and Conlan is her only hope. With the enemy fast approaching, Kat is running out of time. Suddenly for Conlan, revenge doesn't seem so sweet


My Thoughts and Review


What a great read. The book was action packed to beginning to end. All the characters were engaging to read about. I believe this book to be part of a series. This wasn't your typical romance book and not what I expected.This vampire/romance/suspense novel was quite intriguing and was like no others that I have read before which was a pleasant surprise.


Kat Karr is on the run and seeking sanctuary for her two nieces at the O'Day estate.She is on the run accused of a crime that she did not commit but, is also engaged in something even bigger and now someone wants her dead for the secrets she holds on top of being convicted of murder beforehand. Kat made it to the O 'day estate where she encounters Conlan the lover she left behind to take the fall for her crimes before which Conlan was imprisoned and barely got out alive.Never expecting to see Conlan again this is and unexpected surprise.

What amazed me most about this story was Conlan the wounded Vampire with such a large forgiving heart.He totally amazed me and surprised me to no end on how he went about proving Kat's innocence even after she left him to rot in prison. He should have been revenge full and hate full and filled with so many more emotions toward Kat and he is not just the opposite willing to put his life on the line for her even after all the pain she has caused him.My kind of Vampire ! The plot was intriguing right from the beginning that kept you turning the pages just to see what happened next.

The story was well written with just the right amount of romance,intrigue and suspense.I have to say that sometimes through out the book I wanted to smack Kat for her own stupidity.After all Conlan has done for her she still doesn't trust him yet is in love him .Can you say frustrating aagh.....

After reading the book and finding some of the other characters so engaging we plan to go back and find there stories and read them also. His dear friends were all willing to all go out on a limb for Conlan making a great sacrifice to themselves and family by putting themselves on the line for if they we caught abetting him they would all go down with him too .Impressed me greatly!
We really can't say enough good things about how much we enjoyed the book.It is a recommended read for all...