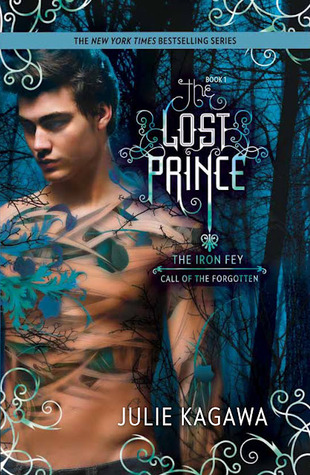 The Lost Prince by Julie Kagawa

Don’t look at Them. Never let Them know you can see Them. That is Ethan Chase’s unbreakable rule. Until the fey he avoids at all costs—including his reputation—begin to disappear, and Ethan is attacked. Now he must change the rules to protect his family. To save a girl he never thought he’d dare to fall for. Ethan thought he had protected himself from his older sister’s world—the land of Faery. His previous time in the Iron Realm left him with nothing but fear and disgust for the world Meghan Chase has made her home, a land of myth and talking cats, of magic and seductive enemies. But when destiny comes for Ethan, there is no escape from a danger long, long forgotten. This novel is one of Julie’s books that will have you demanding for the second one as soon as you finish your read.

I really enjoyed this story ! This has been such a great series.I am glad that Ethan got his own story but, I think this won't be the last we here from him.And a Thank you Netgalley and Harlequin Teen for allowing me to read an Advance Readers Copy of The Lost Prince.

Ethan Chase, Meghan's brother also the Queen of the Iron Fey he is gifted with the ability to see the world of the fey.

Ethan surprised me in this story as I was so surprised at his bitterness toward life and his sister it was almost on the verge of hostel.But, after being kidnapped as a child and brought to the Fey where danger lurks at every corner I guess I am should not be that surprised. And even in the mortal world the creatures can't leave the guy alone but, his resentment and his disrespect toward his sister was another thing altogether.Ethan is labeled a bad boy and has gotten a reputation for being one.But, he really is undeserving if it all ,the mishaps occurring they were caused by the Fey creatures and he was only trying to protect himself.

Ethan is forced to flee to the Iron realm to see the Queen and his sister.Something or someone is making the Fey creatures and other living creatures in the mortal world disappear.When mysterious ghost-like fey start killing exiles and kidnapping half-bloods Ethan reluctantly visits the NeverNever. Ethan needs to find a way to find his friend and let the Queen know what is going on and the danger this new development brings.

Ethan is joined on this journey with a classmate Kenzie.Ethan not meaning to has brought Kenzie with him to the Iron Fey for her safety and his own as something or someone is out to get them.I loved the slow building romance between Ethan and Kenzie in this novel! Ethan who is so used to being alone kept pushing Kenzie away, which at times was infuriating, but Kenzie is so strong and independent that she wouldn't take any of Ethan's crap. I liked that about her, it actually reminded me a lot of Meghan with her relationship with Ash the unseelie Prince of the winter court.

The pages are graced with some of our favorite characters Ash, Meghan and Puck and our favorite cat but, only briefly.We are introduced to a new characters like Kierran who happens to be Ash and Meaghan's son and lets not forget Kenzie and also we encounter the displaced Queen who has made her own little world.

The story was a page turner from beginning to end.Kierran joins with Ethan and Kenzie on there wild adventure. As always there journey is fraught with nothing but danger.Kenzie on the other hand is enjoying her time spent in the NeverNever even with all the danger lurking about. She is very adventurous and wants to learn all she can in her limited time in the Fey.

Ethan and his brooding mood softens a bit to develop a slow and budding romance with Kenzie.She was such a fun character to read about.And as for Kierran Ash and Meghan's son I didn't really get a good reading on him yet whether I am going to like his character or not. I felt that he was a little bit to dangerous (meaning he doesn't look at the consequences of his actions beforehand just dives right in making him extremely dangerous )Without the thought to others welfare he puts others in danger and may just get them killed.Also I am not so sure he is trust worthy. I just get a bad vibe about him.Who's side is he on away ?You might ask yourself this to after reading this story.

A lot happens in the story while uncovering this plot of the who dun-nit and we learn about a prophecy and what is to come true and who the players are.It makes you very edgy and things are not looking good for the near future.Pretty scary in fact and has you wondering if you all ready know who is the traitor? I have to say it was and overall engaging story.Had all the things to make a great story a good plot great characters even though I missed the camaraderie of some off the other characters this novel was a bit more serious.I am glad to see new characters gracing the pages.I loved the adventure.I am thinking that we will see more of these characters to come in the future books.

I have to say that no matter what Iron Fey novel you pick up it is going to be throughly enjoyable. A must read ! A recommended read to all ages whether your young or old you won't be disappointed.