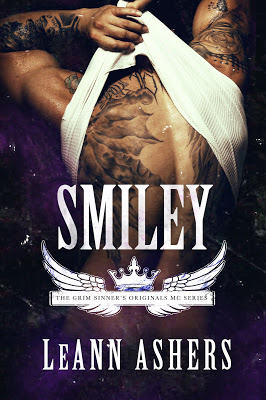 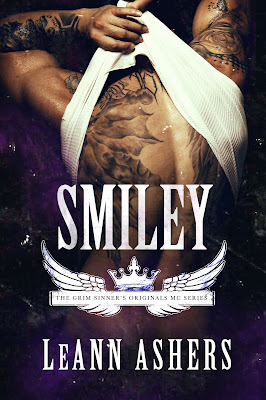 It was completely unexpected. I’d never imagined he would come into my life. From the moment I met him, I knew there was no going back. He made me feel things I had never experienced before:


I was floating on air. Nothing could touch me with him by my side. He became my everything.
Smiley
I’d never expected my life to change upon walking into the Devil Souls MC. At first glance, I almost fell on my ass, and I knew I had to have her. She was everything I never knew I wanted, and hell if that didn’t stir something in me. Adeline gave me something I had been missing my whole life:
Passion
Desire
Contentment
I’m the retired president of the Grim Sinners MC but, in the end, you never really leave. The Devil Souls and The Grim Sinners clashed and were brought together to fight the biggest battle yet.
We had to protect our families at any cost.

I really don't know where to start with this review other than to say the minute Smiley looked up from his phone and into Adeline's eyes and said "Your having dinner with me tonight." I fell head over heels in love with him.
Warning-This story touches a lot on subjects such as abuse, rape,torture,prostitution , vengeance,pain suffering and trauma all this things that happened in Adeline's past that lead her to having PTSD and nightmares.
Before reading this story you need to read the other stories in which Adeline was introduced to  get the full background of the horrendous life she had lived prior to this book.
(Recommend reading Techy at least first)
I love a book like this all about second chances especially when you think that it is a not possibility and that your never going heal from your past but, it is possible when you have the love of a large mc family named the Devil Souls.
Most MC's do not co-habitat unless its with their affiliate chapters but, Adeline's daughter is the old Lady of one of the Devil Souls members and Smiley's daughter is married to a member also so the MC family for Adeline is a combined one. That's one lucky Gal!
This time around its hard to pick a favorite but, I have no choice than to pick Smiley hands down !
What made the choice for me to pick him was that Smiley at every turn surprised me not only with his deeds but, with his overwhelming protectiveness and kindness and love that he showed his woman as well as his children and grand-children.I loved how patient and kind and gentle he could be but, he had a whole other dangerous side to him where he put the fear in god in most people.
Omg! Just thinking about the pain ,suffering and torture Adeline endured her entire life broke my heart each and every time her past was brought up.She became a women to be admired for her strength kindness and courage and the determination to survive the horrors she endured and still walk away with a mind intact, this alone was a milestone in her recovery of taking her own life back.
I loved the nicknames they had for Adeline but, most of all I loved how the entire club of children called her Gigi and they all loved her as much as she did them.
I loved the romance between Smiley and Adeline and how it slowly developed and just by Smiley giving her experiences she had never thought she would have and making some of the little things she wanted to enjoy out of life come true we watched a small miracle of this women being re-born.I loved being on her journey of healing and finding herself once again.A character that you could not help but love as she was nothing but goodness personified.
For me the most heart breaking moment and turning point in the story for me was the moment Adeline aka Gigi stepped out on that beach with all those children in a two piece bathing suit. These children all saw her as their grand-mother and vice versa but, for me I saw a moment in time that Adeline had finally let go of her past once and for all.
All in all we loved the story from cover to cover.I loved the little miracles that occurred throughout the story as well as god interventions and his little gifts as some would say this just made the story more endearing and more lovable.
Recommended read to all who can handle a book with the subject matter as this one had !
P.S. My final thoughts would be I would want a guy like Smiley to have my back each and every time .Adeline was full of so much kindness and goodness that she not only had Smiley at her back but each and every member of both The Devil Souls and The Grim Sinners....
My kind of Gal! 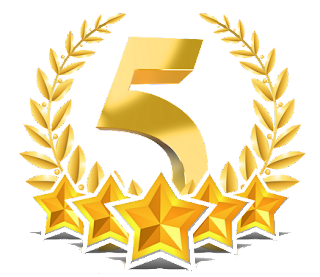 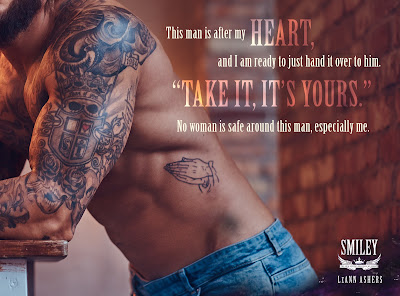 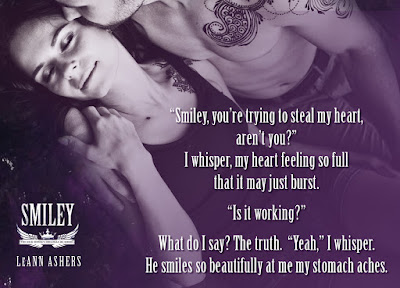 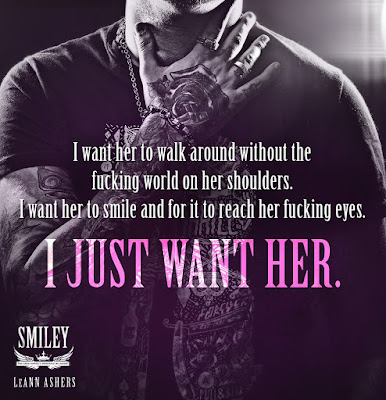 LeAnn Ashers is a blogger-turned-author who spends her days reading and writing. She released her debut novel early 2016, and can't wait to see where this adventure continues to take her. LeAnn enjoys writing about strong-minded females and swoon-worthy, protective alpha males who love their women unconditionally.